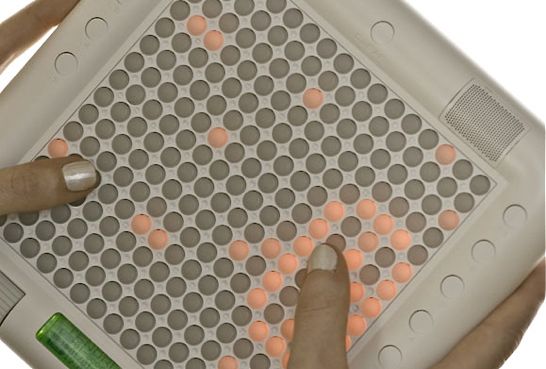 Both versions will now be available through standard musical instrument retail channels after initial test marketing in 2009 via e-commerce channels.

Functionally, the new O model is exactly the same as the original W model, except it cannot be operated with batteries, its 256 orange LEDs are only visible on one side of the unit and it is encased in plastic.

Yamaha is positioning the original Tenori On W for live performance, since its LED display is visible on two sides, and the Tenori On O for music production.

The Tenori-on is the product of collaboration between Toshio Iwai, a leading media artist who provided the idea and design, and Yamaha, which provided its electronic musical instrument technology.

Physically, Tenori-on takes the shape of a square board, approximately 8 X 8 inches, with a matrix of 16 vertical and 16 horizontal rows of LED buttons, or switches, (for a total of 256 in all), which, when blinking on and off, provide a visual image of the structure of the music. When these buttons are touched directly, it is possible to create intuitive compositions, even without specialized knowledge of music, and enjoy playing with sounds. It is also possible to perform compositions in real time as the player is composing them.

8 thoughts on “Tenori On Orange Now Available For $699”