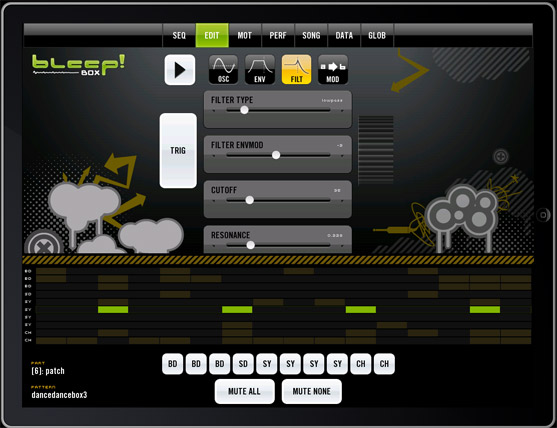 iPad Music Software: bleep!BOX 1.2.0 – a n electronic drum/synth beat box for the iPhone, iPod touch and now the Apple iPad – has been submitted to the App Store:

1.2.0 is a universal binary, meaning it runs on both the iPad and iPhone / Touch devices using the same executable. You won’t have to buy bleep!BOX again to get it on the iPad – if you already own it on the iPhone, you can use it on the iPad and take advantage of the bigger interface. 1.2.0 has a few feature additions – a delay effect has been added to each of the Synth parts (meaning you can get individual delays for those, in addition to the existing global delay). We also made it so you can tap and drag any of the top edit buttons on the SEQ page to edit their values. This makes it possible to do quick adjustments in one gesture. I also have included a number of bug fixes and the interface overall should run faster thanks to some rendering optimizations.

I decided to make bleep!BOX work in both portrait and landscape on the iPad. This ended up taking about 12+ hours to do yesterday, but I was worried that it might not be approved if I left the current behavior of forcing the landscape orientation. Overall, I think it’s a cool feature and I’m looking forward to seeing it in action on a real device.

It looks like bleep!Box – and a lot of other iPhone apps – will be a lot more usable on the iPad. Full feature list below.

The new limitations are the human ones of perception.