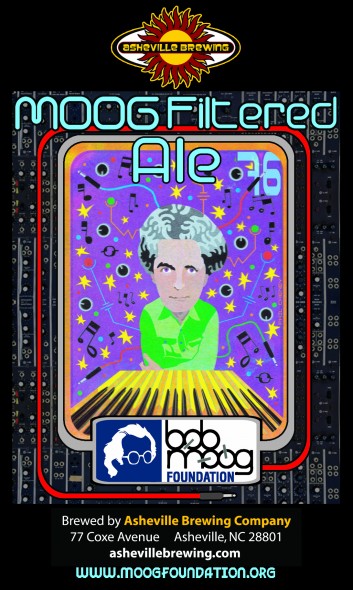 The beer will be available beginning May 27, 2010 at the Foundation’s fundraising event, Moogus Operandi featuring synthesizer wizard Erik Norlander.

All profits from the sale of the beer will be donated to the Bob Moog Foundation to benefit their projects. The beer is being released in conjunction with Bob’s May 23 birthday.

Moog Filtered Ale will be be distributed nationally and internationally in 22-ounce bottles through Asheville’s Bruisin’ Ales and will be available on tap in various locations throughout Western North Carolina. The beer will be sold from May 27 through July 31, after which it will no longer be available.

“Moog Filtered Ale is an American-style pale ale with distinctive notes of caramel and pine. It’s a very accessible beer that reflects the Moog legacy. I’ve been a fan of Bob Moog since college, and I am excited to present a beer in honor of an American pioneer,” says Doug Riley, brewer and part owner of the Asheville Brewing Company.

The colorful label for the Ale was designed by Asheville artist Phil Cheney. The label, an original graphic in vibrant shades of purple, green, and orange, shows Bob Moog leaning over a keyboard with musical notes, synthesizer knobs, and patch cables floating from his head. In the upper right hand corner of the label, “76? commemorates Bob’s May 23 birthday.

A launch party for Moog Filtered Ale will be held on May 27, 2010, at the Orange Peel in Asheville. The event, Moogus Operandi, will feature virtuoso synthesist Erik Norlander and his massive custom modular synthesizer, affectionately called “the Wall of Doom.” An auction of Moog-inspired art will be held on eBay a week prior to the event and will conclude the night of the event.

Tickets to the event are $10 in advance and $12 at the door and can be purchased through the Orange Peel.

40 thoughts on “New Moog Beer Lets You Drink To Bob Moog & Support The Bob Moog Foundation While You’re At It!”