The bad news is that the LinnDrum II probably won’t see the light of day for a while.

The good news is that electronic instrument pioneer Roger Linn (the LinnDrum) is up to something even more interesting.

My particular interest is in a new instrument that while capable of entirely new sounds and playing techniques, is also able to reproduce the sounds, virtuosic performance capabilities and subtleties that we’ve come to know and love from traditional musical instruments, but without all their problems and limitations.

I’ve come up with a prototype of an instrument design that I like.

The prototype consists of a multi-touch, pressure-sensitive, high-resolution USB touch surface from a company called TouchCo (details below), plus a Max/MSP patch written by me and my wife Ingrid, and an OSC/TUIO driver written by a friend and fellow music/art/technology enthusiast named Tim Thompson.

This looks amazing – but it’s also likely to be vaporware unless Linn can generate some interest from investors.

I came up with this design in 2006 and development has been slow because my small company has limited resources to develop such a complex product. (Any interested investors?)

Also, there aren’t many musicians who see anything wrong with current instruments, so not too many people would buy it anyway. A key expense is in developing a multi-touch, pressure-sensitive, high-resolution, fast-response, low cost touch surface technology.

Then in 2009, a new company called TouchCo introduced a technology for a multi-touch, pressure-sensitive, high-resolution input surface that’s also very low cost, quoting $10 per square foot in high volume. In fact, I’m using one of their technology evaluation units for the input surface in the video above. Unfortunately, Amazon bought them in January 2010 in order to add touchscreen technology to Kindle, then immediately shut them down and took their product off the market.

Alas, until someone else comes up with a similar touch technology or Amazon decides to make the TouchCo technology available, development of our product will be limited to refining our Max/MSP patch. One promising new technology we’ve evaluated is a touchscreen from Stantum (same company as JazzMutant, makers of the Lemur) that senses surface area of your fingers, which is not a bad alternative to sensing pressure because your finger surface area increases as you increase pressure. However, I found that their current resolution wasn’t high enough for what I’m trying to do, plus true pressure sensing is better for musical control.

So given this situation, I decided to call this a research project and publish what I’ve done so far in an effort to get more people interested in and thinking about new musical instruments. Maybe even Jeff Bezos will read this and see that in the grand war between Kindles, iPads and Android tablets, it wouldn’t be such a bad thing to permit some sort of controlled usage of the TouchCo technology.

Note that the demo above is a prototype – see the image below for an idea of what a finished LinnStrument might look like: 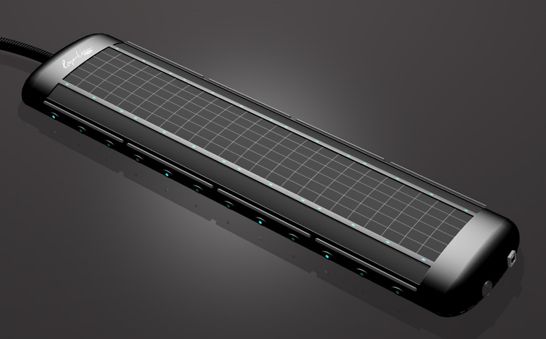 Let me know what you think about the LinnStrument.

Is this what keyboards are going to look like in the future?

Can the LinnStrument actually be built?

And do you have any ideas on how Linn can get this project jumpstarted?