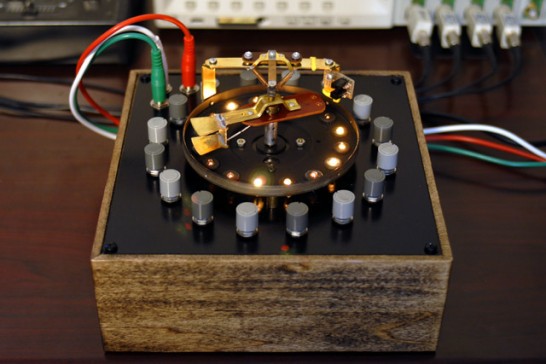 The original Circle Machine, created by Scott in the 1950’s, was a pioneering electromechanical music sequencer.

Brown’s take on the machine isn’t intended to be a historically accurate recreation, but a working modern version of the Circle Machine:

I built this Circle Machine fun since I thought it would be visually interesting.  I didn’t intend for this to be a precision sequencer nor a faithful recreation of the Raymond Scott Circle Machine.  There are slight issues with absolute repeatability due to ambient room lighting and the CdS sensor settling time.  Obvious modifications could include using a higher torque stepper motor or a DC motor and changing the sensor to a photo transistor.  However I am pleased with the results as it works well to generate interesting sequences and is fun to watch.

Brown’s Circle Machine is appealing for many reasons. It’s gorgeous, it has a sort of steampunk sensibility and the whirligig motion is just fun to watch.

Here’s what Scott had to say about his early step sequencer:

This device is what I’ve named The Circle Machine.

The intensity of each light in this circle is individually adjustable. At the tip of the arm there is a photo cell. This cell is a part of an electronic sound generating system, so adjusted that the more light the cell ‘sees’ the higher the pitch of the sound produced. The cell also moves around in a circle at adjustable speeds. One of the controls, above the circle of lights, changes the pitch center of the complete cycle when required. As you will notice, there are many variable functions possible.

Check out Brown’s Modularsynthesis site for details on the genesis and construction of his unique Circle Machine.