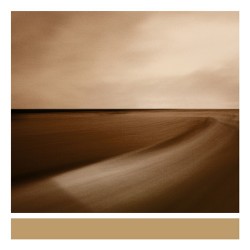 Brian Eno has released a statement on his upcoming LP, Small Craft On A Milk Sea, his first on the Warp label.

Eno says that the new album will be shaped by the idea of film soundtracks, and evocations of place and space:

“In the early 70s, I found myself preferring film soundtracks to most other types of records. What drew me to them was their sensuality and unfinished-ness – in the absence of the film they invited you, the listener, to complete them in your mind. If you hadn’t even seen the film, the music remained evocative – like the lingering perfume of somebody who’s just left a room you’ve entered. I heard Nino Rota’s Fellini soundtracks often before I saw the films and in listening to them I found I could imagine a whole movie in advance: and though it usually turned out to be nothing much like Fellini’s version, it left me with the idea that a music which left itself in some way unresolved engaged the listener in a particularly creative way.

“The work in this collection is a result of an occasional collaboration between myself, Leo Abrahams and Jon Hopkins. The two of them are gifted young player/composers whose work, like mine, is intimately connected to the possibilities and freedoms of electronic music. Over the last few years we’ve worked together several times, enjoying exploring the huge new sonic territories now available to musicians. Mostly the pieces on this album resulted not from ‘composition’ in the classical sense, but from improvisation. The improvisations are not attempts to end up with a song, but rather with a landscape, a feeling of a place and perhaps the suggestion of an event. In a sense they deliberately lack ‘personality’: there is no singer, no narrator, no guide as to what you ought to be feeling. If these pieces had been used in films, the film would complete the picture. As they stand, they are the mirror-image of silent movies – sound-only movies.

“I am especially pleased to be releasing this new material on Warp, for a long time one of the truly innovative labels. I am pleased to be in the company of many artists whose work I’ve followed and admired over the years. I look forward to a rewarding relationship.”

Small Craft On A Milk Sea is scheduled for release on November 2nd.

One thought on “Brian Eno On His New Album, Small Craft On A Milk Sea”

If you had a sign above every studio door saying ‘This Studio is a Musical Instrument’ it would make such a different approach to recording.