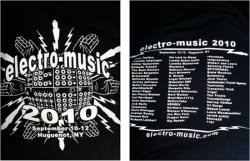 It was his first time at the Electro-Music festival, and he came away impressed:

So to recap – I saw amazing performances, had a great time performing, learned new things at sessions, picked up lots of tips and ideas, had a blast playing jams, sold/bought/traded CDs and ended up discovering some great new music. The festival offered a unique opportunity to meet electronic music artists and enthusiasts from all over the US and around the world. I also ended up bumping into some twitter and Modulate This friends I’d never met in person before.

Check out Mosher’s full show report at ModulateThis! And if you made it to Electro-Music 2010, leave a comment and let us know what you thought the highlights were.