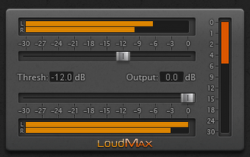 LoudMax is described as a maximizer with a transparent sound, designed to retain the original character of the music as much as possible even at high compression levels.