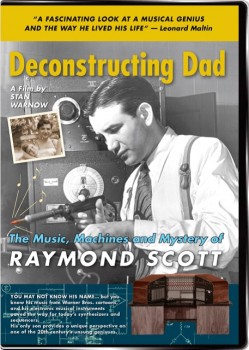 Deconstructing Dad: The Music, Machines & Mystery Of Raymond Scott is a new documentary on the life of  composer, band leader and electronic music pioneer Raymond Scott.

Raymond Scott is probably best known for the tightly arranged swing band works from early in his career, which were featured in Looney Tunes cartoons.

Later in his career, though, Scott helped pioneer commercial electronic music, developing his own electronic music instruments and using them to create music for advertisements and television shows.

Directed by Scott’s son, Stan Warnow, Deconstructing Dad is a fascinating and unflinching look at the life and work of Scott, who was gifted with tremendous talents as a musician, but less gifted as a businessman, husband and father.

The film is basically chronological, covering the highlights of Scott’s career. In his long career, Scott did notable work as a composer, as a band leader, on television, as an inventor and as an electronic music pioneer. Using interviews with family and associates, vintage photos and movies and Scott’s recordings, Warnow creates a vivid image of Scott, his work and the context of the times he lived in.

But the film also looks at Scott’s relationships throughout his life, letting his family, friends and business partners tell their stories. And it becomes clear that Scott was lousy at most relationships, leading to failed marriages and parenting that’s probably charitably characterized as ‘distant’. It’s also clear that Scott’s success was limited by his insecurities and fears.

Director Warnow, Raymond Scott’s son, does a fantastic job of weaving these stories together. And, by telling Scott’s story unflinchingly, the director adds another layer to his documentary  – Warnow’s own story of how he got to know his distant father through the making of the film.

Ultimately, Deconstructing Dad manages to transcend being a documentary about Raymond Scott to deal with bigger ideas: the challenge of understanding even our closest family; the underbelly of American ideals; and coming to grips with feeling unwanted.

Stan Warnow’s Deconstructing Dad – The Music, Machines & Mystery Of Raymond Scott is a great film. If you’re interested in Scott or electronic music history, it’s a must see.

Distribution of the film is limited, but you can order it  online here . The price is $24.95. and the DVD is Region-Free NTSC Video.

If you’ve seen Deconstructing Dad, please leave a comment with your thoughts on the film!