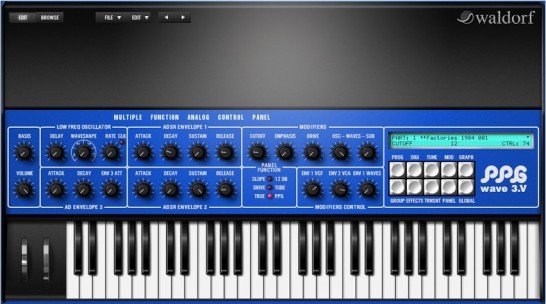 The PPG Wave 3.V is a virtual recreation of the PPG Wave series, arguably amongst the most coveted high-end synthesizers of the Eighties.

To enhance the plug-in’s sound library further still, users can load samples via drag and drop or the file selection dialogue; with the eight-way multi-mode, it’s even possible to play back multi-samples and refine the sound along the lines of the original PPG Waveterm, which offered user sampling and DIY wavetable creation (as well as advanced — for the time — sequencing capabilities), as the heart and brain of PPG’s Music Computer System.

The audio signal path flows through a 12dB/oct or 24dB/oct low-pass filter, a recreation of that found in the PPG Wave 2.2/2.3, with an overdrive providing additional sound characteristics.

The original PPG Waves distinguished themselves from the competition of the day by virtue of a unique user interface — the Multiple Function Analog Control Panel providing convenient hands-on access to the most important sound parameters, while the adjacent Multiple Function Digital Control Panel displayed deeper digital access, both numerically and via a series of not-quite-so-convenient cryptic abbreviations; the Waldorf PPG Wave 3.V effectively recreates this intuitive interface — albeit with easier-to-read/understand values and wording!

Additionally, almost all parameters can be accessed via host automation; most also support MIDI controller information, so the Waldorf PPG Wave 3.V can easily integrate into any existing production environment.

Waldorf PPG Wave 3.V is available for 169€ (including VAT for EU countries). Waldorf is also offering the PPG Wave 3.V Upgrade from all versions of its PPG Wave 2.V plug-in, including the LE version and the Steinberg-distributed Waldorf Edition plug-in suite, at a special Christmas discounted price of 99€ from December 15 to 31; thereafter, it will cost 119€. More information about the Upgrade can be found in the Waldorf online shop: http://shop.waldorfmusic.de

An unrestricted evaluation license (100 hours over 100 days) is also available from here: http://www.waldorfmusic.de/en/ppg-3-evaluation.html