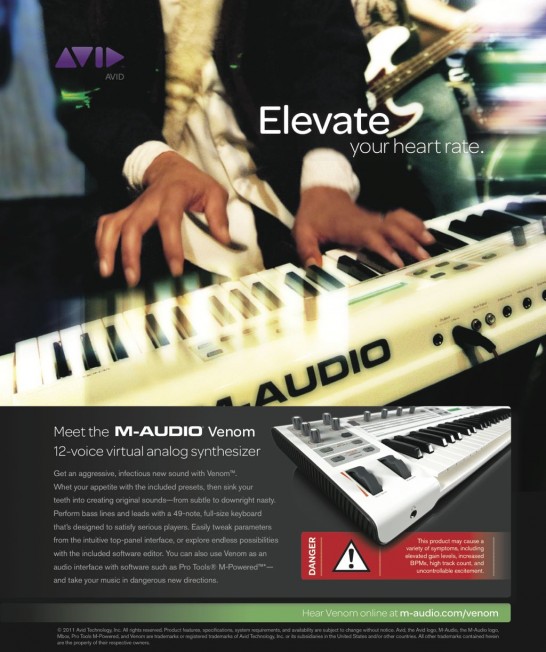 It looks like the cat is out of the bag on M-Audio’s ‘wicked new sound’ – the new product that was the subject of the company’s recent Crystal Method teaser video.

The company is using the 2011 NAMM Show to make the official introduction. But, based on this ad slick, the company will be introducing the M-Audio Venom – a new 12-voice virtual analog synthesizer.

See the video, below, for a overview of the new M-Audio Venom.

We haven’t seen an official announcement from M-Audio on the Venom yet, so these specs are preliminary.

M-Audio’s ad copy, which describes the new synth’s sound as “infectious” and “nasty”, suggests that they’re trying to position the Venom as an Access Virus alternative. M-Audio also warns that “This product may cause a variety of symptoms, including elevated gain levels…”

Much of the initial response to the M-Audio Venom has been a collective “meh” about it being another virtual analog synthesizer. That could change quickly, though, if the M-Audio Venom actually delivers an infectious, nasty synth engine.

Let us know what you think: are you excited by new competition in the world of virtual analog synths, or were you hoping for something else from M-Audio?

Update; The Venom is available now for $500.