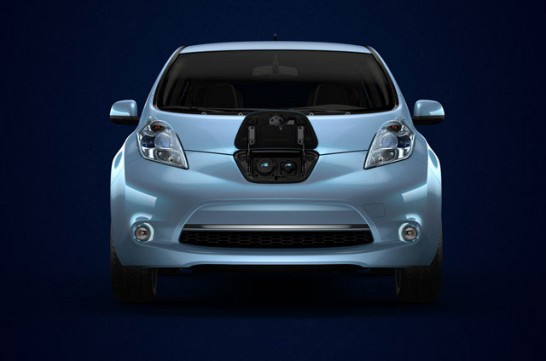 In the future – will all cars have built-in synthesizers?

The LA Times reports that the new all-electric Nissan Leaf, above, has a built-in synthesizer – because it’s so quiet that the car would otherwise be dangerous to blind people:

Electric cars and hybrids offer the promise of a cleaner alternative to gasoline-only cars. They’ve also raised new concerns. At slow speeds, electric cars and hybrids make almost no noise. According to a recent study by the National Highway Traffic Safety Administration, pedestrians and bicyclists are hit twice as often by hybrids as by conventional cars at intersections, parking lots and other spots where cars normally slow down.

Developing the Leaf’s sound was a huge challenge for Tsuyoshi Kanuma’s team at Nissan’s labs in Atsugi, southwest of Tokyo. Make it too soft and people wouldn’t know that a car was approaching. Too loud and it might annoy the person behind the wheel or stir complaints from neighbors. Too strange and children and old people wouldn’t recognize it as a car.

“It got more complex as we looked into it,” Kanuma said.

Kanuma’s early experiments were with music. He met with a pipe organ expert in Germany and a music professor at Tokyo University of the Arts. He had his team compose songs but later dropped the idea.

“Colleagues in the U.S. told us it sounded like an ice cream truck,” he said.

Kanuma’s breakthrough came while analyzing traffic sound. Ambient noise can vary among cities. But Kanuma stumbled upon the common link: Noise generated by friction between a car’s tires and the road peaks at around 1 kilohertz.

Working with a Hollywood sound studio, Kanuma’s team mixed tones above and below 1 kilohertz. Tones at the low end of the spectrum, around 600 hertz, were easy for elderly pedestrians to pick out. Adding in higher tones of 2 kilohertz to 4 kilohertz would help the sound carry without it being too loud. That was something Kanuma heard about when studying how opera singers make themselves heard above an orchestra. “We called our sound ‘twin peaks,’ ” he said.

In late 2009, Kanuma sent a dozen sounds for testing to Vanderbilt University in Nashville. In an anti-echo chamber fitted with a ring of speakers, researchers asked subjects whether they could tell where the sounds were approaching from amid background noise. “It represents the complex listening task that blind pedestrians perform at a street corner,” said Daniel Ashmead, a professor who led the study.

At Western Michigan University, tests showed that the sounds were more audible than the engine of a gasoline-powered car. Kanuma’s team also polled experts at the Detroit Institute of Ophthalmology and met with child behavior specialists at the University of Idaho.

In early 2010, Kanuma flew to Detroit with a Leaf prototype and tested the sound at crosswalks and in parking lots. Officials from the National Federation of the Blind recommended changes. “The car’s sound started too abruptly,” Kanuma said. “They suggested giving the car an idling sound.”

You can hear examples of the Nissan Leaf sound design below.

For example – it would be cool if you could load customized sounds for your car – much like you do with ringtones. But, there could be safety benefits to having cars sounding the same when they are doing things like turning or backing up.

Check out the examples above and let me know what you think of the future of sound design for cars!

10 thoughts on “In The Future, Will All Cars Have Built-in Synthesizers?”