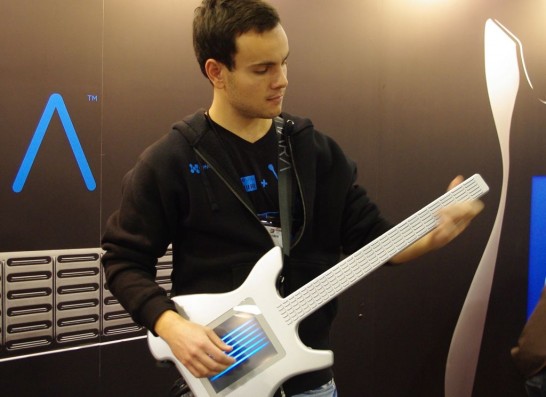 The Misa Digital Instruments Kitara  and Kitara Limited Edition are unique 100% digital guitars. The Kitara includes a multifunction touch-screen, MIDI controls and an on-board polyphonic synthesizer with effects. Instead of using strings, guitarists control sound through their fingertips, using the touch-screen and fret board to play, enhance and alter sounds in real-time.

Here’s an official demo video of the Misa Kitara digital guitar in action:

We discussed the Kitara in depth with Misa Digital and found it to be an interesting work in progress.

The Kitara’s openness could be one of its most interesting features. This could lead to some interesting unplanned uses for the digital guitar

Check it out and let us know what you think of the Misa Kitara digital guitar.

18 thoughts on “The Misa Kitara Digital Guitar, An Open Platform For Synthesis”