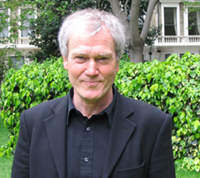 Every technological introduction changes the music. There are musicians who would not exist in other environments. The form of many new musicians’ work is enabled by intelligent use of new technologies.

Autechre for instance, require a portable digital ecology in order to exist in their present form. Theirs is an intelligent, visceral response to new digital environments.

Just as Frank Sinatra changed both singing and recording by using a microphone and an amplifier – enabling him to sing quietly in front of a big band, so DAWs and laptops have created methods of working and kinds of music that were not possible before.

He also talks about the use of vintage equipment on his new John Foxx & the Maths album, Interplay:

We only used analogue synths on that album – nothing digital. We were interested in how even a slight shift in technology alters things profoundly.

For instance, if you can’t use MIDI or digital editing to place sounds, you have to play them manually, or sequence them. Each of these methods will give you entirely different results, so the feel and meaning of the song will alter too.

After a while, you realize you are dealing with an entire lost or alternative ecology.

The opening track, Shatterproof, from Interplay is embedded above.

Foxx also talks about his love of the Roland CR-78 drum machine.

We’ve come to understand each other very well over the years.

The CR78 is a marvelous, accidental confection – a non-dancing Japanese programmer’s mathematical reconstruction of western dance patterns, intended for use as a cabaret accompaniment device.

Serious recording engineers despised it. But they were wrong.

I immediately realized that this machine offered an entirely new approach to percussion. Its rhythms are so bizarre that it is impossible to get anything conventional out of it. If you make it central in a recording, you immediately have a unique sonic layout and pattern – a new kind of matrix, in which you can easily position other equally delicious sounds, like a piece of abstract sculpture. That is how it demanded that you create something not heard before.

Any instrument that can make such demands is infinitely valuable.

The entire interview, at Steelberry Clones, is an interesting and thoughtful read, whether you’re a fan of Foxx’s music or not.