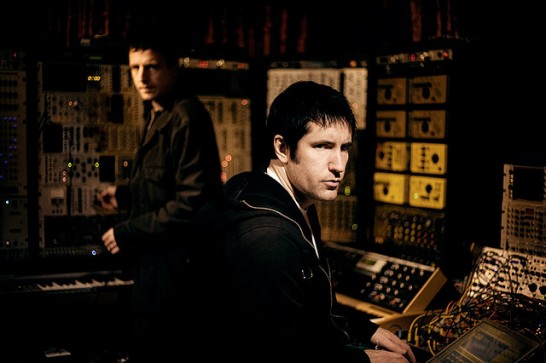 Trent Reznor and Atticus Ross have won the Academy Award for their soundtrack to The Social Network.

“When we finished work on The Social Network,” said Reznor, “we were very proud of our work and happy to just be involved in this film. To be standing up here in this company is humbling and flattering beyond words.”

“I’d like to especially thank the Academy for recognizing our work here, and [director] David Fincher, thank you so much for the opportunity,” added Reznor.

Backstage, Reznor mentioned one of the inspirations for the soundtrack, Vangelis‘ iconic score to Blade Runner.

“Thankfully, David had a very clear idea of what he wanted,” said Reznor. “The only immediate direction he gave us was that there be no orchestra, be similar to Blade Runner — inhabit the same iconic quality — but not sound dated.”

“It was definitely difficult to score for a bunch of people talking in rooms. There were no landscapes, or battles scenes. It wasn’t obvious to us what shape it would have.”

Reznor & Ross have another score on their plates, David Fincher’s next film, a remake of The Girl With the Dragon Tattoo.