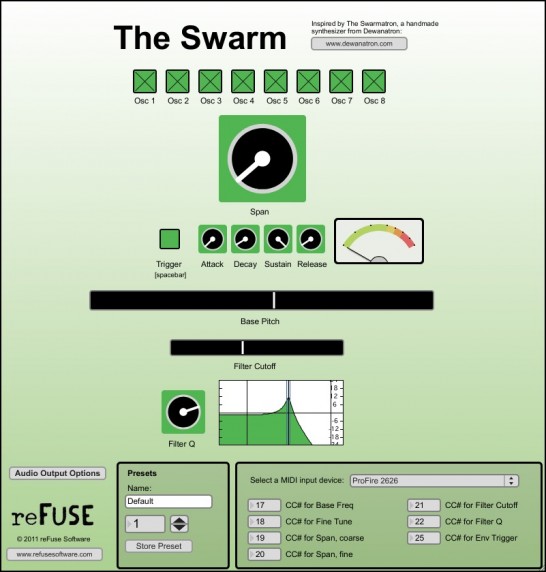 reFuse Software has released a new software synthesizer, inspired by the Dewanatron Swarmatron synthesizer, used by Trent Reznor and Atticus Ross in making the soundtrack for The Social Network.

Here’s what reFuse has to say about The Swarm:

While The Swarm is based off the Swarmatron, it is not an emulation of that synth! It is meant to give some of the sonic flavor of the original, but the hardware itself (which includes a pair of ribbon controllers) is integral to the experience of using an actual Swarmatron. So, while we offer this software model as a tribute to the idea of the original, we acknowledge that in this case, software can only go so far!

The basic architecture of The Swarm is as follows:

Not too crazy per se, but the interesting part is in the tuning of the oscillators. They are tuned with a pair of controls:

1) the Base Pitch slider, which tunes the 1st oscillator

Note: The Swarm is an OS X standalone application, not an AU/VST.