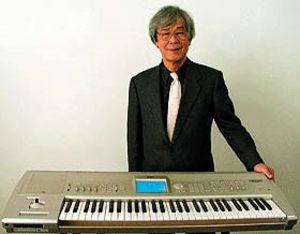 Korg has announced the death of company Chairman Tsutomu Katoh. Katoh died this morning, March 15, 2011, after a long fight with cancer.

Since he founded Korg Inc. in 1963, Mr. Katoh has led our company with great talent, vision and leadership. He was loved and respected by all the employees and Korg family members, and he made a huge contribution to the lives of countless musicians around the world.

Chairman Katoh was a true visionary and a personal friend, and he will be missed by everyone at Korg and indeed, the entire music industry. Over the past twenty years, I have witnessed firsthand the ways in which Korg has flourished under his and his family’s guidance and leadership. His passion and professional goals were one and the same: to provide innovative tools for musicians to help them grow their craft. And those goals remained the same throughout his life and career. He will be deeply missed.

A funeral service will be held March 24 in Japan.

Katoh’s legacy includes a long list of amazing instruments, including:

At Katoh’s death, Korg seems as vital as ever, with a broad range of products and many of it’s older products now considered classics.

Tsutomu Katoh was born in Showa-ward, Nagoya City in Japan on August 28, 1926. After advanced graduation from Nagoya Shogyo commercial high school in 1943, He enrolled in the navy, where he was among the crew of the submarine “Koryu” (meaning dragon) during WWII.

After the war, he held a position at a trading company, and eventually went on to become the proprietor of a nightclub in the early 1960s. Tadashi Osanai, a noted Japanese accordionist, performed regularly at Katoh’s club. Katoh told Osanai, who was also an engineering graduate from Japan’s prestigious Tokyo Imperial University, that it would be nice to have a rhythm machine to keep the beat.

Katoh and Osanai teamed up to create and market the world’s first disk rotary rhythm machine. While working on the project, Mr. Katoh founded Keio Electronic Laboratories. Their first product, the Disc Rotary Electric Auto Rhythm machine, or Doncamatic DA-20, was released in 1963.

The Doncamatic was such a groundbreaking product that it became the origin of “doncama,” a word widely used in Japanese music and broadcasting studios to mean the guide clicks.

Most recently, Mr. Katoh left his personal mark on music history by lending his voice at the request of the popular UK electronic group Gorillaz, who are fans of the Doncamatic. A spoken-word sample of Katoh saying “Doncamatic” can be heard in the band’s song of the same title.

In 1970, the company developed a variation of an electronic organ, called “Synthesizer Prototype I,” which became the first synthesizer ever made in Japan. The company then sold its first commercial keyboard and named it “KORGUE” by combining the initials of Katoh (K) and Osanai (O) with the French word ‘orgue,’ meaning organ.

In 1973 the company name was formally changed to KORG, with the release of the miniKORG, an affordable synthesizer.

In 1975, Korg released the world’s first handheld electronic guitar tuner, the WT-10, which offered every musician an affordable on-the-go tuner for the first time. Katoh had always been proud of the large volume of positive feedback he received from musicians all over the world, both amateur and professional.

In 1988, the company released the M1, which established the music workstation category, and continued to release a number of unique electronic musical instruments.

Mr. Katoh once commented in a Japanese trade magazine interview, “I don’t think a company should cling to a certain philosophy. Philosophy is an unchanging thought and if you try to remain the same, you will end up becoming a fossil as the world around you changes. We need to be nimble and flexible to be able to respond to the changing times.”

True to his words, he led Korg as a company with unmatched creativity and originality, always chasing new ideas. He also kept close relations with musicians. Supported by a host of artists, he built Korg as a brand that is loved by many artists and musical instrument fans, and one that has continued to contribute to electronic music around the world for nearly five decades.

Seiki Kato, president of Korg Inc., expresses, “Inheriting the intentions of Chairman Katoh, who always had deep gratitude to all people who love Korg and its products, we pledge to continue making products that meet their expectations.”

You can learn more about the history of Korg gear in Gordon Reid’s series of articles at SOS:

If you’ve got thoughts to share about Tsutomu Katoh or his legacy of Korg gear, please leave a comment.