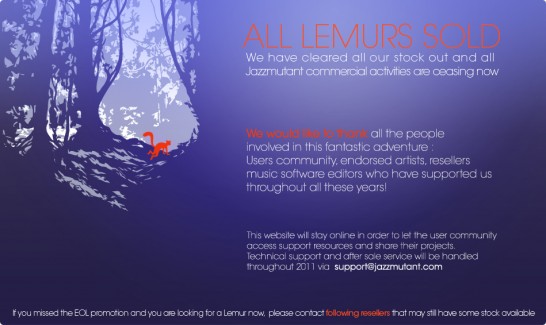 JazzMutant has updated their site with a sort of tombstone to their company and it’s iconic Lemur multi-touch music controller. All of JazzMutant’s remaining stock of Lemur controllers is now sold. They note, “We have cleared all our stock out and all Jazzmutant commercial activities are ceasing now.”

Less than a year ago, JazzMutant was skeptical about the prospects of the iPad as a musical tool:

Having been at the forefront of touch innovation for seven years now, Jazzmutant has been watching the fast evolution of the multi-touch landscape. We expect to see a lot of Lemur rip-offs showing up on the App Store, as well as other multitouch capable devices. However, we believe that it’s not really the same kind of product. The Lemur is a device dedicated to music and visual control. The iPad, on the other hand, is a mainstream product, a ‘jack-of-all-trades’ that’s not specifically tailored to musicians’ needs.

The Lemur will continue to be the choice of many professionals. However, you can be sure that whatever happens, you will most definitely be hearing exciting news from JazzMutant again in the future.

JazzMutant’s stance reads as overly optimistic or arrogant from today’s perspective. Many would argue that the Lemur was a much more sophisticated tool than any of the current iPad apps. But JazzMutant effectively ceded multi-touch music control to a startups that didn’t have a hardware business to protect.

The Lemur had many features which have yet to be duplicated in any iPad app. In the long run, though, musicians will probably be better served by mainstream tablets, with dozens of competing controller app developers.