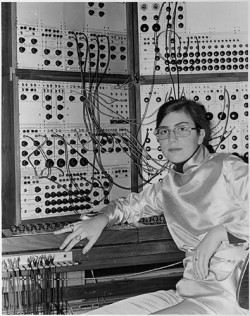 My name is Marietta Cashman is the name of a long-lost collection of works created on the Buchla 100 by Hanna M.G. Shapero between 1968-69.

From 1967 through 1970 my father, composer Harold Shapero, was director of the Brandeis University electronic music studio. The studio was equipped with a Buchla 100 modular synthesizer, which was at the time the state of the art. Though I was not a Brandeis student, but still in high school, my father allowed and encouraged me to work with the Buchla in the studio. I started working there when I was 14 and continued until I was 17. The portrait you see of me with the Buchla was taken (by my father) in 1970.

I spent many hours over those years improvising various “patches” on the Buchla, recording electronic music onto quarter-inch magnetic tape, using the studio’s Ampex 351. Any modification of the sound was primitive at best; the Buchla was equipped with only a spring reverb. I would take the “raw” tapes home where I would edit them and physically splice them together into listenable sequences. I would usually edit copies of the originals, saving the original tapes unspliced for further use.

The sounds on this recording, unheard for 40 years, are a compilation of assorted electronic effects which were thrown together without much planning, rather as a storehouse than as a finished piece. They date from 1968 and 1969. The modern aesthetic of patchwork and accidental meaning, which was only at its beginning in 1968, has made this into “listenable” material. If you listen carefully, you can hear the splices.

Shapero has returned to making electronic music, after 40 years – but her debut release, My name is Marietta Cashman, is a unique sonic time capsule.

You can preview a track of the album below. It’s a free download.