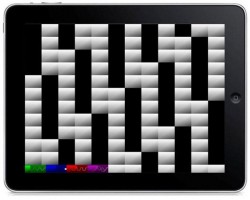 Earlier in the week, we reported on the Open Music App Collaboration Manifesto – a call to iOS music developers to push ahead with inter-app collaboration feature.

The Manifesto defines a set of best practices that should help make the user experience as great as possible for people who want run music apps in parallel. One scenario for this would be using a controller app to play a synth app, running in the background, while a drum machine plays.

iPads and iPhones are posing a challenge to the instrument industry at this time.

iOS devices are essentially rapid prototyping devices that let you make almost anything you want out of a touchscreen, audio, MIDI, accelerometer, networking, etc combination. iOS developers are becoming the new instrument manufacturers, or are at least doing the prototypes for them at a very high turnover rate.

Multitouch has a unique characteristic of being tightly coupled to the dimensions of human hands. It does away with discrete keys, knobs, and sliders. If you put your hand on a screen in a relaxed position with your fingers close to each other without touching, you can move them very quickly. Every spot that a user touches should be an oval a little bit larger than a fingertip. If you make the note spots any smaller, then the instrument quickly becomes unplayable. So, lining up all notes besides each other to get more octaves does not work. The awkward stretch to reach accidentals at this small size is equally unhelpful.

A densely packed grid of squares that are about the size of a fingertip is exactly what string instrument players are used to. So, a simple row of chromatics stacked by fourths is what we want. We can play this VERY fast, and have room for many octaves. It’s guitar layout. Furthermore, the pitch handling can be much more expressive because it’s a glass surface. We know exactly where the finger is at all times, and frets are now optional, or simply smarter than they were before.

An interesting characteristic of a stack of strings tuned to fourths is that there is a LOT of symmetry in the layout. There are no odd shapes to remember that vary based on the key that is being played in.

Transposition is simply moving up or down some number of squares. This even applies to tuning. Just play a quartertone lower than you normally would and you are playing along with something that was tuned differently without actually retuning the instrument. It is a perfect isomorphic instrument, with a layout that’s already familiar to 80% of players. This is the real reason why this layout has a special affinity for the touch screen.

Fielding also shared this microtonal iPhone synth jam as an example of why he thinks iOS call for moving beyond the traditional piano approach for MIDI controllers:

Fielding goes on, in his post, to dig deep into what he sees as best practices for MIDI on iOS.

In essence, Fielding is making the case against ‘horseless carriage thinking’ on the iOS music platform.

Are virtual piano keyboards the best interface for playing tablet-based instruments? Fieldings argues no – and that designers need to get creative and find user interfaces that are natural fits for multi-touch devices and their capabilities.

Interesting stuff – and it reflects our initial impressions of the iPad as a music platform, when the device was first introduced:

While a lot of great music apps have been done for iOS and other tablet computers, few apps have deeply explored the capabilities inherent in tablet computing for creating something new. This is probably one of the reasons for some of the anti-iPad backlash; a piano MIDI controller is always going to be a hell of a lot more playable than a virtual piano.

Give Fielding’s thoughts on MIDI Instruments on iOS a look – and let us know if you think it’s time for tablet music app developers to get more creative with their user interfaces.