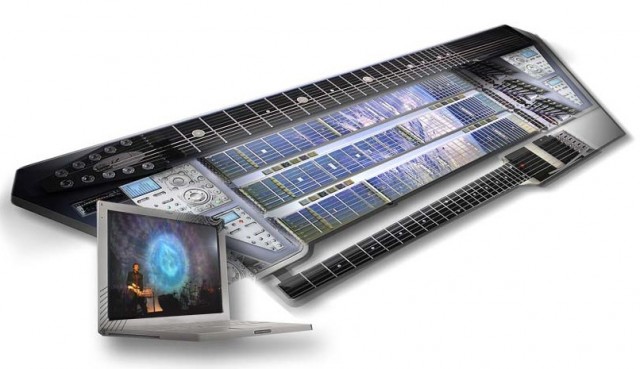 The StringStation is a new electornic instrument that, according to the developer, “advances the new science of Digital Sound Modeling to allow the expressive dynamics of human touch on strings to be the catalyst for any sound imaginable.”

Here’s the official summary on the Stringstation:

WHAT: The Stringstation is a custom 40-string music instrument designed to allow tactile strings to advance future music in Surround Sound.

WHO: Developed by Passport / Audion recording artist Jim Bartz. Bartz was signed as a guitarist pre-StringStation by Larry Fast of Peter Gabriels band while he was an engineer/producer at one of the midwests premier recording facilities.

WHY: Discoveries in the late night recording studio led to invention of this stringed instrument that could be split into a matrix of separate outputs, allowing the 3D resonance and layering of many different sound colors from one source with the ability to play bass, rhythm, melody and orchestrations simultaneously with two hands.

HOW: The StringStation utilizes every playing technique known to stringed instruments and many new ones evolved from the combination of 3 customized 8-string steel guitars, one 6-string, a 10-string Chapman Stick.

Check out the video demo below and let us know what you think of the Stringstation.

Bartz is currently raising money to produce the Stringstation.