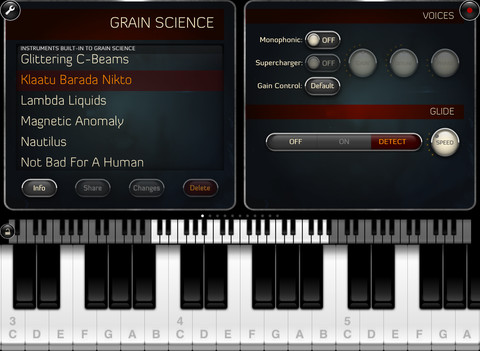 iPad Music Software: Grain Science is a new iPad synthesizer, based on the principles of granular synthesis.

Here’s what developer Wooji Juice has to say about Grain Science:

Use the built-in waveforms, or record or import your own — then use the sophisticated grain engine to create something completely new from them! Grain Science is easy to get to grips with, but offers lots of depth to explore: instead of offering one or two LFOs, almost any parameter in the system can be programmed to vary over time in complex ways.

Using new optimisations available in iOS 5, we can provide two grain units per voice, which you can combine for morphing or complex modulated sounds, then send through a configurable FX chain. Pick any 4 from the collection of FX units (including various types of distortion, high- and low-pass filters, phaser, resonance and echo), and connect them up in any order. Other audio tweaks include soft loop, reverb, glide and supercharger controls, and the ability to affect granular synthesis in realtime (live grainbending).

Also featured are an arpeggiator with both chord and step-sequence modes; Core MIDI support, including “tap & twist” learning for setting up controls; and a customisable performance screen with a collection of XY Pads and wheels.

Rounding it off, Grain Science plays nicely with others: Dropbox, Twitter and email integration are all included, for sharing or exporting your waveforms, recordings of your performances, and instrument (patch) designs.

Here are a couple of demos of Grain Science in action:

If you’ve used Grain Science, leave a comment with your impressions of it!