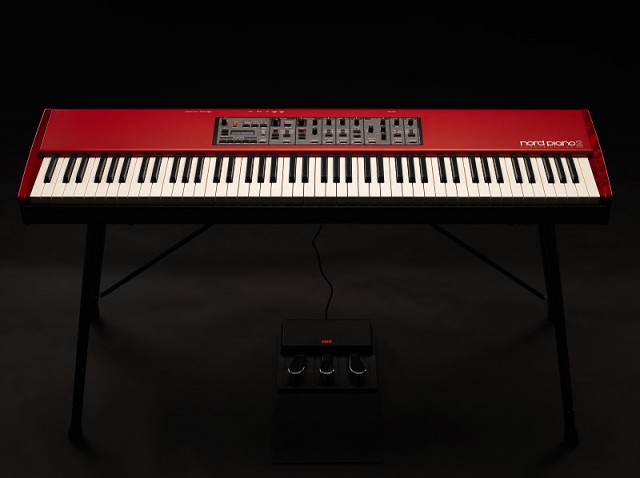 2012 NAMM Show: The Nord Piano 2 HA88 is a portable 88-key hammer-action weighted keyboard that lets you play, split and layer Grand, Upright and Electric Pianos from the Nord Piano Library with sounds from the versatile Nord Sample Library.

The Nord Piano 2 comes with a wide range of acoustic and electro-mechanical instruments from the Nord Piano Library. The included Nord Triple Pedal features a dynamic sustain pedal that can also recreate the mechanical “stomp” and “sizzle” noises that occur when the lifting or releasing the dampener in an Acoustic Grand or Upright Piano. The Advanced String Resonance feature simulates the subtle phenomenon that occurs when piano strings cause other un-dampened strings to resonate, further adding to an amazing level of realism.

The Nord Sample Library offers more than 1000 sample-instruments ranging from Strings, Brass, Synths and Basses to the vintage sounds of the Mellotron and Chamberlin.

Both the Nord Piano and Nord Sample libraries are continuously updated and are available as free downloads for all Nord owners.

All of the sounds in the Nord Piano 2 HA88 are replaceable, making it an instrument that is built to evolve with you. It’s even possible to create your own sample instruments using the Nord Sample Editor.

The Nord Piano 2 has dedicated buttons and knobs for all functions the performing musician needs, according to Nord.

“We’ve made it amazingly simple to layer and split sounds, and there’s a volume pedal input for sneaking in those strings while you keep playing,” they note.