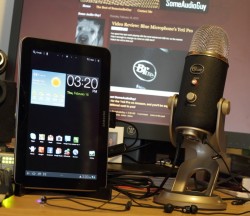 There’s an interesting rant at the Some Audio Guy blog about the state of audio on Android devices:

In playing around with the Yeti Pro I recently reviewed, I got curious about what else I might be able to do with this USB wunder-mic.

Both the Nexus and the Galaxy Tab both powered the mic. Unfortunately, neither phone nor tablet knew what to DO with a USB mic, and that’s where I was stopped short of my dream mobile recording rig.

It’s time Android. It’s time. If I can use my tablet as a live view monitor and control surface for my Canon 7D, It’s long past time for me to be able to connect a USB mic to my tablet and record my voice over.

Meanwhile, IOS, especially on the iPad, has become a new platform for musicians – with 48-track recorders, dozens of software synths, high-end control apps and more. And this is despite the fact that Android is the more popular OS for smartphones.

There are Android music apps. But they are few and far between, while iOS users have a wide array of options.

We’ve noted several hurdles for Android as a music & audio platform in the past, including audio latency, OS fragmentation and inconsistent hardware. It may be a combination of these things that’s stifling the platforms development for audio and music.

What do you think? Why is Android going nowhere fast as an audio platform? And do you see this changing anytime soon?

70 thoughts on “Why Is Android Going Nowhere Fast As An Audio Platform?”

We are living in a cultural dark age of musical pollution: You put the radio on, and five minutes later you need an aspirin.