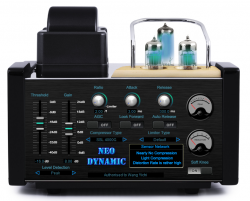 Sound Magic has introduced Neo Dynamic – a new effect that they describe as ‘a new concept in dynamic processing technology’.

Neo Dynamic is more like a sampler than typical compressors and limiters. INeo Dynamic starts with 10 compressors/limiters, based on well-known models.

Neo Dynamic is easier to use than traditional compressors. Neo Dynamic will tell you when over compression is happening – even when it’s not easily audible. It will also let you know when you set the threshold too high, letting you know that the compressor isn’t actually doing anything. Neo Dynamic will also calculate the distortion rate based on your settings.

Neo Dynamic sells for €49, as a Windows VST or Add-on for Supreme Piano 2. A demo version is available.