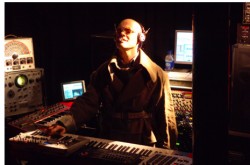 Synth pop pioneer Thomas Dolby had this to say, in a recent interview, about the evolution of electronic music:

It was very rarefied at the beginning of my career. The machines were big and heavy, and they didn’t stay in tune very well. It was quite a small handful of people that were able to get their hands on the right machines. I was lucky to be one of them.

Those of us who were working then are considered pioneers. It’s really because there were so few of us that you couldn’t help but be a pioneer if you fired one of those things up.

Today the opposite is really true. The technology is very accessible, but there’s ten thousand other guys that can get a hold of the same stuff. Invariably people flip through the presets and number seventeen turns out to sound pretty cool, so they all put the same groove together. So statistically there’s going to be someone in the world who’s put together the same combination.

I think the long and the short of it is that there can be a lot of generic-sounding music… Today there are people who live and breathe electronic music, and they play it obsessively like people play World of Warcraft. They sort of disappear in their cubicle for two years and they never come out. And they’re doing some really remarkable stuff.

There’s still new sounds to be created, and new combinations. You can be very expressive with the powerful tools that exist today.

What do you think? Is the proliferation of electronic music tools leading to generic-sounding music?

14 thoughts on “Thomas Dolby On The Evolution Of Electronic Music”