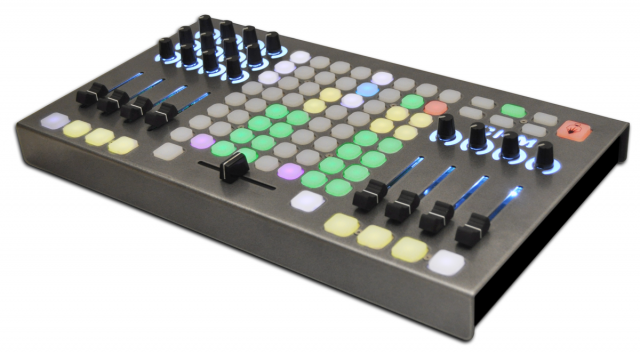 The OhmRGB features most of the features of the OhmRGB such as programmable RGB backlight buttons, high quality faders and knob, and is housed in an all new aluminum body with a custom finish.

“I love the look of the different woods we’ve used on the OhmRGB, but ever since I made the CNTLR:R enclosure, the benefits of the lower profile became really apparent,” said  Travis Redding, Livid’s Director of Hardware Design. “In order to make it small enough to fit into a backpack we’ve eliminated the MIDI in and out jacks, expansion port and wood end caps.”
“I wanted to give it a unique look, so I created a different body design and a custom gunmetal finish,” adds Redding. “People looking for a controller that they can hold up to the road are really going to like this design.”

The OhmRGB Slim is fully programmable and has a wide range of applications and scripts for music, visual, and lighting production.

The OhmRGB Slim has a street price of $549 and is available directly at shop.lividinstruments.com and Livid dealers worldwide.