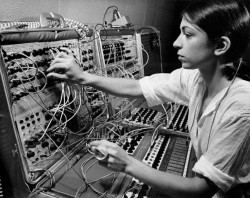 Suzanne Ciani is featured in a new interview at TheQuietus, about her new retrospective CD, Lixiviation.

Ciani pioneered the commercial use of synthesizers in the 70s, doing creative sound design and jingles with a Buchla system and other synthesizers.

In the interview, Ciani shares her perspective on Don Buchla and his approach to electronic instruments.

Don was a very special instrument designer and he had a vision that he is still expressing today. His idea was to make electronic instruments that could be used for live performances, because they were compact enough for transporting between venues. And he has always designed appropriate interfaces for them.

He showed me that the idea of playing a black and white keyboard with one of these instruments was completely ridiculous. It was inappropriate and had nothing to do with the way you would use an electronic instrument.

So he made keyboards that are threaded, that have flat plates and the surface of the key can be made to respond to pressure or the amount of it that is covered. There was a new form of communication happening via his electronic instruments. He never used the word synthesizer.

She also shares some thoughts on why it’s taken so long for people to catch up conceptually with Don Buchla’s work:

But back then there was a barrier to people seeing what we were doing.

They say that hundreds of years ago, the native people couldn’t see the ships coming to the Americas because they didn’t have a concept of what ships were.

This means in order to see something you have to have a concept of it. People had no concept of electronic music back then. So even if they were sitting in front of a machine and sound was coming out of it, they still didn’t get it.

Out of desperation really, some of these machines were made to look familiar so people could identify them as musical. Bob Moog put a keyboard on it and people were like, ‘Oooooh! It makes music! That’s what it’s for!’

There was a gap between the manufacture of these things and people realising what they were for and I think Don experienced this gap much longer than most.

See the full interview at The Quietus.

Music hath charms to soothe a savage breast, To soften rocks, or bend a knotted oak.