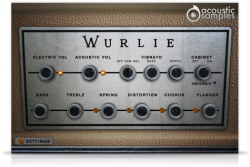 Acoustic Samples has introduced Wurlie, a new virtual instrument, based on the Wurlitzer 206A piano.

Here’s what they have to say about Wurlie:

Wurlie is a 64 keys Wurlitzer 206A piano, and as the Wurlitzer company named it, a “Student Electronic Piano”, and it has a build in amp and cabinet.

The 206A is a student model, and is very similar to a 200A except for its beige color and build in amp/speaker (it also did not come with a tremolo).  We recorded it both from the direct output using a state of the art DI (Universal Audio Solo 610) and also using a pair of microphones right above the keys next to where the head of a player would be.

You also have access to various commonly used effects and a full control over the midi parameters to make it fit to your keyboards response.

Here’s a preview of Wurlie in action:

Wurlie is available now for Mac & Windows for 80 EUR.