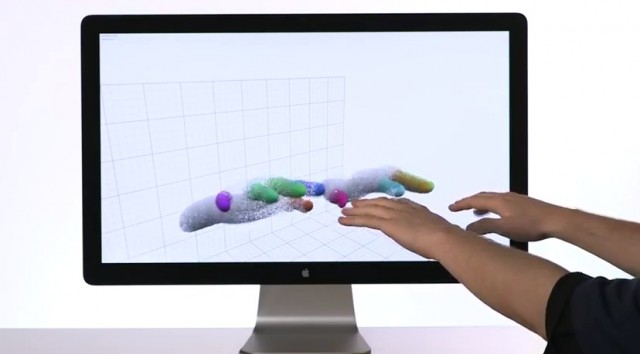 Developers have announced the Leap – a new $70 motion sensor that they say is ‘two hundred times more accurate than any product currently on the market.”

Like the Microsoft Kinect, the Leap is designed to translate your gestures and movement into computer control. But the developers suggest that the Kinect is a toy, compared to the Leap:

This isn’t a game system that roughly maps your hand movements.

The Leap technology is 200 times more accurate than anything else on the market — at any price point. Just about the size of a flash drive, the Leap can distinguish your individual fingers and track your movements down to a 1/100th of a millimeter.

Here’s a video introduction for the Leap:

Seeing this immediately got us thinking about possible music applications.

There has been some developer interest in the Kinect. But we’ve previously noted several important limitations of the Kinect for music applications:

Using a limited resolution sensor (640 x 480 pixel) with a relatively slow sampling rate (30 fps) means that the Kinect captures a fraction of the information that an older, simpler and cheaper “touchless” analog technology – the theremin – is capable of.

The limited resolution means that there’s a practical limit to the number of steps of control that the Kinect can afford.

More critical for musicians, though, is the Kinect’s latency. The frame rate alone of the Kinect is going to create 35-40 milliseconds of latency, In practice, though, the latency appears to be much higher, closer to 1/10th of a second.

These limitations and others have damped interest in the development of Kinect-based music hacks.

Comparing the Kinect to the Leap isn’t an exact apples to apples comparison, because the Leap is tailored to discrete hand gestures, while the Kinect is designed for broader full-body motion.

But the Leap is cheaper, much more accurate and looks like it will offer improved latency over the Kinect. And this should make the Leap better suited to general purpose music hacking. In fact, Leap Motion is looking for interested developers.

Check out the video demo and let us know what you think. Could the Leap succeed where the Kinect has failed and become a new tool for music making?

24 thoughts on “Can The $70 Leap Motion Controller Succeed Where The Kinect Failed?”