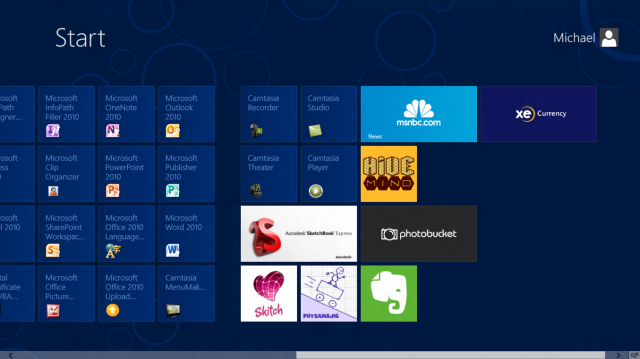 Microsoft is planning radical changes for the next major version of Windows, Windows 8.

Microsoft is responding to pressure from Apple’s success with the iPad with a new version of Windows that promises to provide a unified look, across both tablets and desktop computers.

Cool idea – but can Microsoft deliver on that promise? And can it jumpstart the development of music apps like iOS?

We’re tri-platform here, so we’ve been following WIndows 8 with interest. And among Synthopia’s regular readers, the Mac & Windows platforms are neck and neck, distantly followed by iPad, iPhone and Android. So we expect that Windows 8 may be an important upgrade for a lot of readers, too

One of the most interesting discussions we’ve seen on Windows 8 is a new article by MobileOpportunity’s Michael Mace. He has been digging into into the Windows 8 consumer preview and offers a skeptical take:

The most important message I want you to understand is this: Windows 8 is not Windows.

Although Microsoft calls it Windows, and a lot of Windows code may still be present under the hood, Windows 8 is a completely new operating system in every way that matters to users.  It looks different, it works differently, and it forces you to re-learn much of what you know today about computers.

From a user perspective, Microsoft Windows is being killed this fall and replaced by an entirely new OS that has a Windows 7 emulator tacked onto it.

Mace put together a screencast that covers some of his concerns with WIndows 8:

Microsoft deserves credit for being bold with Windows 8 – and Windows 8’s ‘Metro’ UI looks like it could be an interesting tablet interface.

But desktop users are going to have some serious work to do in order to get comfortable with the UI changes. And many of the UI changes seem to complicate things for power users like electronic musicians.

We’ll know a lot more about the implications of Windows 8 this fall. And even then, though, as with Apple’s OS X Lion, musicians probably should not be among first adopters.