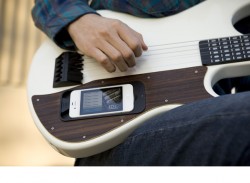 We recently featured the gTar – a new iPhone MIDI guitar controller that’s being developed as a KickStarter project.

Lots of people have been asking us whether the gTar is MIDI compatible. The short answer is yes, but we wanted to illustrate some of the exciting things it can do.

While the video is an interesting technical demonstration, it doesn’t really explain why you’d want to control Ableton Live with a iPhone MIDI guitar or what the benefits of this might be.

Here’s some background on the set up:

Here, we’ve mapped the fretboard out to an Ableton Live set where it is triggering loops and one-shots.

What isn’t demonstrated here is the ability to use a d-pad between the 12th-16th frets to navigate around different areas of the set. There appears to be a bit of lag with the clip triggers, but that has to do with the quantize settings, not the latency of the controller (this should be evident with the triggering of the snares).

The gTar is USB-MIDI compliant and is also compatible with CoreMIDI iOS apps.