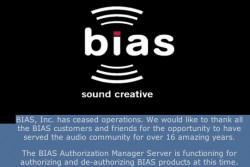 They note on their site:

BIAS, Inc. has ceased operations. We would like to thank all the BIAS customers and friends for the opportunity to have served the audio community for over 16 amazing years.

The BIAS Authorization Manager Server is functioning for authorizing and de-authorizing BIAS products at this time.

Software Of The Damned

If you’re a BIAS app owner and you read a sentence like “The BIAS Authorization Manager Server is functioning for authorizing and de-authorizing BIAS products at this time.” – you’re probably wondering how soon you will be hosed.

At some point, you’ll get a new computer and want to reinstall the apps you paid for. But will you be able to?

This is something I wonder about everytime I have to jump through a convoluted authorization process to install a music app. If the company goes out of business or gets bought ought, will users be hosed?

What do you think music software companies should do when they go out of business? Do they have an obligation to release a version that doesn’t require authorization?

41 thoughts on “BIAS Bites The Dust – What Should Music Software Companies Do When They Fail?”