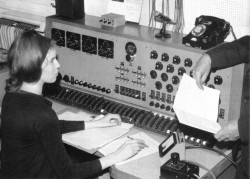 The BBC and the Arts Council of England have announced that they are reincarnating the Radiophonic Workshop.

The Radiophonic Workshop – in its original incarnation – was a pioneering electronic music studio, responsible for sound effects for several generations of BBC shows, and iconic music, like the theme from Dr. Who.

The new Radiophonic Workshop will, unfortunately, not be an old-school electronic music studio, filled with reel-to-reel recorders and knob-laden devices, but a virtual institution.

In 1958 the BBC radiophonic workshop was established. it’s aim was to create new sounds, music and sound effects for BBC programmes. it quickly became the most important electronic music studio in the UK, creating innovative, ground breaking work in often very mainstream and visible ways. it’s most famous creation is probably the doctor who theme music, although it is known as much for the pioneering work of the individuals who worked there including the rare opportunity for women such as Daphne Oram, and Delia Derbyshire to experiment as equals.

It finally closed its doors in 1998 after a slow decline brought on in part by the democratisation, and mass production of electronic components, synthesizers and computers. its reputation though remains unequalled in britain, if not the world.

In 2012 as part of thespace.org, an innovative new digital arts media service created in joint partnership between the BBC and the arts council the radiophonic workshop is being reborn.

Instead of being confined to rooms full of equipment in Maida Vale studios in London, the new radiophonic workshop will instead be a virtual institution, visibly manifested as an online portal and forum for discussion around the challenges of creating new sounds in a world saturated in innovative music technology but lacklustre in terms of actual original output. we will primarily bring together two key disciplines: music composition and software design and as such its members will be drawn from the cutting edge of both.

More information including details of new members, commissions and opportunities will be published in due course.