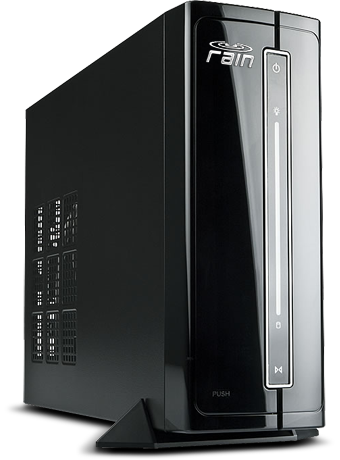 Rain Computers has released a new version of it’s Event Mini Audio Computer, the Event A2 (A for audio, 2 because it’s the second generation).

This is sort of the Windows parallel to the Mac mini – a $799 computer that packs a lot of power into a compact package.

Here’s what Rain has to say about the Event A2:

Since finding that the musical community was hungry for a low price, entry level system still capable of being the most powerful and stable platform for popular creative software like Pro Tools and Cubase, Rain has been on the hunt for ever increasing levels of power and flexibility while maintaining a budget-friendly price for those who can do without the ultimate in power (and expense).

“There are a lot of us here at Rain, including myself, who come from the songwriting and performance side of the music biz. We don’t need a super-power system to run a big studio; we’re just looking for a solid computer that will get out of the way while we’re doing a quick demo of a new song. That’s the type of artist Event A2 is perfectly designed for.” explained Rain Computers CEO, Kevin Jacoby.

Features of the second generation Event include the option for a powerful 2.6GHz quad-core processor, up to 16GB of 1600MHz memory, high speed Solid State Drive (SSD) technology by Corsair.

The new Event A2 is available now, starting at $799 for the dual-core and $999 for a quad-core with 8GB of memory and a 500GB high performance hard drive.