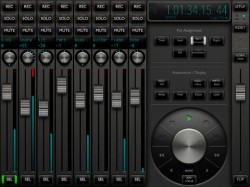 According to the developer, “No longer does it feel like a software emulation of a hardware device, it’s now a real, practical alternative to expensive hardware controllers.

The AC-7 Core HD takes full advantage of the power of newer iOS 6 iPad models, and is designed with controls large enough to be comfortably used on the iPad Mini.

For users of the first generation iPad, the original “AC-7 Core” app is still available.

There are custom button layouts for:

Any software with support for the “MCU” or “HUI” protocols should work, too.

Note: It was not possible for the developer to offer the iOS6 version as a free update to owners of the original AC-7 Core app, because a large part of their user base is using the first generation iPad (which can’t be upgraded to iOS6), and could lose the ability to run the app if they e.g. updated through iTunes.

The developer is offering the new version for $2.99 for the first month after release to enable existing users to upgrade cheaply.