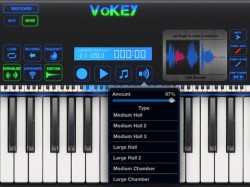 Developer Terry Demco has released an update to VoKey, a software sampler for iOS, adding AudioBus support and more.