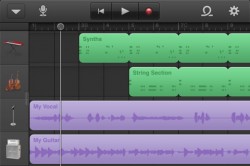 Apple today threw its weight behind  AudioBus, releasing an update to GarageBand that supports the tool for routing audio between applications.

This is a major milestone for AudioBus. Many will interpret this as an endorsement by Apple of the app-to-app audio technology. And, while the arrival of Jack for iOS is major news, today’s GarageBand update, and Apple’s support, makes AudioBus the de facto standard for routing audio between apps on iOS.

What do you think of Apple’s support for AudioBus? Leave a comment with your thoughts!

31 thoughts on “Apple Supports AudioBus In GarageBand For iOS”