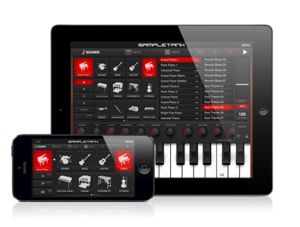 IK Multimedia has released an update of its SampleTank music creation app.

SampleTank, a “sound-and-groove-module” app for iPhone, iPad and iPod touch, is now fully optimized to support the larger screen of the iPhone 5 and the new iPod touch, while taking advantage of the enhanced graphics capabilities of the Retina display.

SampleTank features 16 instrument categories and includes over 500 sounds, from drums to pianos to basses to synths to guitars and many more. Users can customize the sounds through editable parameters such as volume, attack, and filter; and with insert effects and a master reverb. Additional instruments, patterns and grooves are available in instrument-specific expansion sound packs.

SampleTank now also is capable of increased polyphony: up to 64 simultaneous voices are now available.

SampleTank is available for $19.99/€17.99 from the App Store on iPhone, iPad and iPod touch. A free version of the app, SampleTank FREE, is also available, which includes 20 instrument sounds and can also be expanded with the optional sound packs via In-App Purchase.