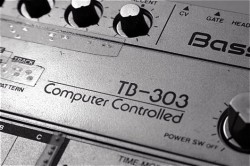 That’s the question raised by a post today at the Roland site. Roland’s Oz Owen writes:

It’s hard to make a definitive statement these days without kicking off an almighty flame war, but we’re going to make one anyway: the TB-303 is the greatest single-oscillator monosynth of all time, bar none. There, we said it. And you know what? We’re right. Argue all you want. Go on, see where it gets you!

What other monosynth, and single oscillator monosynth at that, has carved such a prominent niche for itself throughout the contemporary landscape of electronic music? What other synth could claim to have such a unique and distinctive feel, capable of creating sound like no other? No one could argue that the electronic music scene would be markedly different today without that little silver box.

We’re not going to bite on the “greatest single-oscillator monosynth of all time, bar none” flame-bait, because Roland raises a more immediate question.

Since they clearly think the 303 is the greatest monosynth ever – and since Korg has a hit on their hands with the re-release of the MS-20 Mini monosynth – is Roland considering doing something similar with the TB-303?

Let us know what you think! Should Roland bring back the TB-303?

114 thoughts on “Should Roland Bring Back The TB-303 Bassline Synth?”