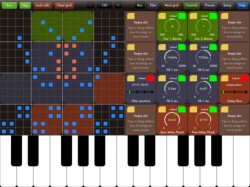 It’s here! Audiobus, recording, AudioCopy and a looper. Use WOPR with any Audiobus Effect or Output slot apps! You can also record directly within WOPR and build up layered compositions. You can take your riffs and use them in Sonoma MAPI-compatible apps, too, if you prefer. Grab pristine, noise-free recordings using iTunes file sharing and load them into your main computer DAW. Use the loop playback feature to layer recordings on top of each other, building up giant sounds for sampling or simply to lay down a bass line, chords and lead in three passes.

Double-tap “Rec” to start recording immediately, or tap it once to record as soon as you press the first key. Double tap your recordings in the Files window to give them a name and save them. Press “Play” once to play the recording, or press it twice to have it loop.

There’s the usual few extra presets for download from within the app too; as before, delete your old system presets if you’re upgrading.

One thought on “WOPR Synth Updated With AudioBus”