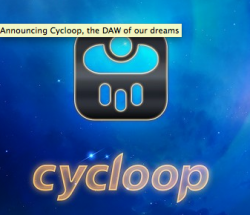 Amidio has announced a new iPad DAW, Cycloop, that they call the mobile ‘daw of our dreams’:

We are not going to make a clone of existing DAW apps. Instead, we choose a special way, something you’ve never seen before. Cycloop is going to inherit certain decisions from the famous DOS trackers (Scream, Impulse, Fast trackers), along with some Songineer and MINT.io motives.

Expect an app that can possibly fulfill any mobile musician’s needs. Multitracking, plugin-based insert & send FX, built-in IDM and randomizer tricks, scale manipulations and flexible sample/synth architecture. All that packed (but not crowded) in just several clean-designed screens (no neon this time!) of pure touchscreen music-making goodness, and working in conjuction with our existing (and future) apps.

Cycloop will run only on the iPad. We will reveal more details as we proceed with the development. As of today, the design is finished (which took an incredible amount of planning and prototyping), fully documented and the code is at 10% completion mark. We are musicians ourselves and strongly keen to release an first-class, mind-blowing app. If everything goes well, it could happen in late Summer.

WIth 90% of the coding to be done, it could also not happen in late Summer. We’ll look forward to hearing more about Cycloop as Amidio gets closer to releasing it.