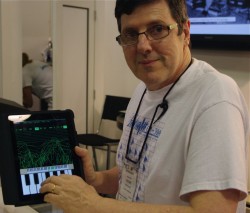 Along with the print article, there is also a short video, embedded below, about the Fairlight and its influence on popular music since its debut in 1979. Keep an eye out for the clip of Herbie Hancock playing the instrument on Sesame Street:

The original Fairlight CMI (short for Computer Musical Instrument) was a technological and creative success and was featured in lots of 80s pop hits from artists as diverse as Jean Michel Jarre, Duran Duran, Peter Gabriel, Stevie Wonder, Herbie Hancock and Devo, among many others. But at $50,000 to $100,000 apiece, the Fairlight had limited commercial success, and the instrument went out of production (and its maker went bankrupt) in 1986.

More recently, Peter Vogel Instruments has resurrected the Fairlight CMI (now called the CMI 30A, in tribute to its 30th anniversary), and has also released a $50 iOS version.

The full print article is at this link. And check out this earlier post for more of Herbie Hancock on Sesame Street.

7 thoughts on “Peter Vogel – ‘The Man Who Revolutionised Music’”