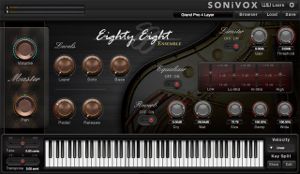 Eighty Eight Ensemble 2.0 also includes dozens of ensemble presets that provide the live performer with a broad arsenal of sounds. Ensemble layers offer a string, synth or vocal pad. Ensemble splits add a bass, and/or a solo instrument such as flute, that plays above or below the piano. The new integrated Patch Browser stores and sorts patches by Class, Genre, and Character attributes.

Eighty Eight Ensemble 2.0 also offers users a range of customization options. Four-band EQ for refining the timbre of each sound, an improved limiter for enhanced dynamic control, and a new robust reverb section with high-frequency damping and room size parameters. In addition, the piano can be instantly transposed into any key.