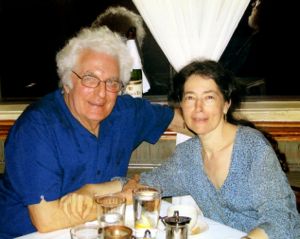 We recently reported that the Bob Moog Foundation had suffered a setback, with the announcement that Cornell University, rather than the Foundation, would be getting Moog’s personal notes, plans, drawings and recordings.

The announcement has proven to be controversial, because many people in the synth community have supported the Moog Foundation and their efforts over year’s since Moog’s death to preserve these items. And the announcement highlights disagreements within Moog’s own family over what is best for his archive. 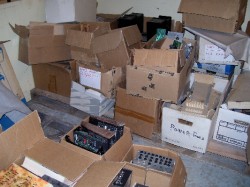 Michelle Moog-Koussa, Executive Director of the Bob Moog Foundation and one of Moog’s daughters, has shared her view on the decision at the Foundation site. She highlights the efforts of the Foundation and others over the last 7 years to preserve Moog’s collection of artifacts, shown at right at his former workshop.

Dr. Grams-Moog shared the following statement with us, explaining the reasoning behind her decision and noting that Moog’s archives will be “housed with the Emancipation Proclamation and Gettysburg Address”:

“I am dismayed to hear so much misinformation about my donation of the Bob Moog Archives to Cornell University.  I did not intend to speak publicly about this. However, the number of false statements about the situation and the damage it could cause to Bob’s legacy have compelled me to do so.

“I am especially disappointed by the attacks on Mike Adams and Moog Music. Mike is the business partner Bob chose and worked side-by-side with. Bob loved and respected Mike, and he would be proud of the company Moog Music is today. The company is making both Bob’s products and new ones that build on what he did. It employs 50 people and supports the local economy. All this is the legacy that mattered to Bob.

“I want to express my appreciation to all the volunteers who poured their passion for Bob into the BMF and to assure them that Bob’s legacy will be fully accessible to them through Cornell’s work. Everyone, including the Foundation, will benefit from being able to access the collection online and in person when it is organized and made available to the public.

“I hope this clarifies my reasoning and dispels the falsehoods around this matter.  Please do not lose sight of the main issue. It’s a great honor to have Bob’s archives housed with the Emancipation Proclamation and Gettysburg Address.  Cornell is the best solution for scholars, engineers, and students to study Bob’s work in perpetuity.”

Note: In the spirit of full disclosure, we should note that Synthtopia has donated banner ad space to the Bob Moog Foundation for several years.