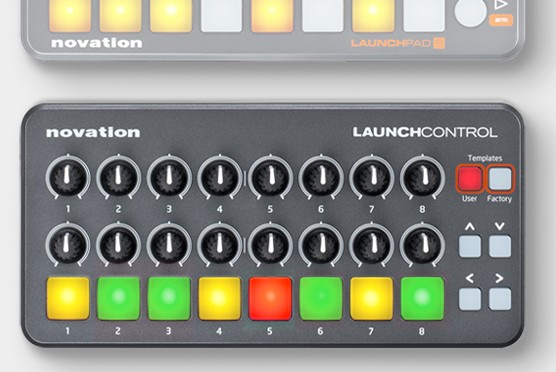 Launch Control works with all major music software – and with the iPad. Launch Control’s three color pads can be used to play loops and samples, while the knobs can tweak filters, effects, levels, panning, and more.

With the iPad, Launch Control can be used out of the box with the Launchpad App to trigger samples and effects. Launch Control connects direct to the iPad with the Apple Camera Connection Kit (not included) with no need for a power supply. The Launchpad App allows control of samples with Launch Control’s pads, while using the knobs to tweak filters and change levels to provide a compact and impressive portable performance system.

Launch Control also works with all the major music software on Mac and PC and is fully class-compliant, controlling MIDI-compatible software like Cubase, Reason, Logic and FL Studio with no need for drivers. Both Ableton Live Lite and an extensive Loopmasters sample pack are included.

Launch Control’s 16 knobs and eight launch pads can be set up with templates that let you flip them to control different software parameters. There are eight factory templates and eight of your own to create and play, whatever your choice of software, giving an effective arsenal of up to 448 controls.

Expect street prices for Novation Launch Control to be about $99.