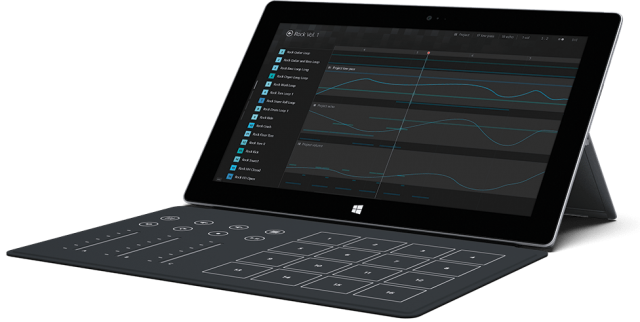 Microsoft today announced that the second generation of its Microsoft Surface family of tablets. It also announced new accessories for the Surface tablet computers, including a pressure-sensitive DJ controller.

The first generation of Microsoft Surface devices failed to make a dent in the popularity of iPad and Android tablets. Will Microsoft have more success this time around? Check out the details and let us know what you think!

Surface 2 is powered by an NVIDIA Tegra 4 processor, making apps run faster and smoother and increasing battery life to up to 10 hours for video playback. The 10.6-inch ClearType Full HD display now renders 1080p video and its full-size USB port has been upgraded to USB 3.0 for up to four times faster file transfers.

Surface 2 is available in 32GB and 64GB configurations; pricing will start at $449.

Surface Pro 2 is the successor to Surface Pro and, like its predecessor, is intended as a laptop replacement, capable of running virtually all your Windows software.

Surface Pro 2 is powered by a fourth-generation Intel Core i5 processor which, combined with other improvements, delivers increased performance and up to 75 percent longer battery life than Surface Pro.

The biggest surprise in Microsoft’s announcements today is the Surface Music Kit – a new keyboard + software combination designed for remixing.

Experiment with content from familiar and emerging artists or import your own.

Automatically syncs beats per minute (BPM) and key for seamless mixing. You don’t need to be a pro to sound like one.

The Kit helps you choose which sounds and samples work best with each other.

Specifications and pricing on the Surface Music Kit are to come – so it’s unclear whether this will be purely a consumer-oriented accessory, or if it the keyboard will work with other Windows music apps.

69 thoughts on “Microsoft Intros Surface 2, Surface Music Kit – Are They Enough For You To Consider A Windows Tablet?”