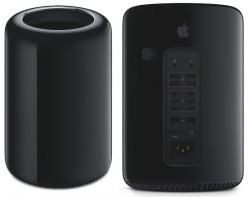 The new Mac Pro is priced starting at $2,999 (US) and will be available in December.

Check out the specs – and let us know if you think a $2,999 Mac Pro makes sense for musicians.

Two workstation-class AMD FirePro GPUs with up to 12GB of video memory provide up to seven teraflops of compute power and up to eight times the graphics performance of the previous generation Mac Pro. OpenGL and OpenCL are optimized in OS X Mavericks to leverage the full computing power of the Mac Pro CPU and dual GPUs.

The new Mac Pro features PCIe-based flash storage that delivers sequential read speeds up to 1.2GBps and is up to 10 times faster than conventional desktop hard drives. ECC DDR3 running at 1866 MHz, with a four-channel memory controller, gives the new Mac Pro up to 60GBps of memory bandwidth, twice that of the previous generation Mac Pro. The power and bandwidth of Mac Pro means you can seamlessly edit full-resolution 4K video streams and play them in real time.

The new Mac Pro will be available in December through the Apple Online Store (www.apple.com), Apple’s retail stores and select Apple Authorized Resellers.