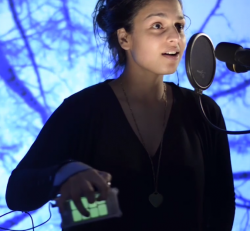 The iPad has earned the bulk of the mindshare of mobile musicians, because of its combination of power, size and wide range of apps.

A new project, AUUG Motion Synth, explores the possibilities the iPhone and iPod touch, converting the devices into wearable motion-controlled instruments. Using it, you can control iOS synths, desktop music apps and even hardware.

The platform is made up of three components:

The AUUG grip positions the screen of an iPhone or iPod touch to be played by the fingers and secures the device to the user’s hand during motion:

The AUUG app converts your iOS device’s motion sensor data into signals for shaping sound, and transfers these signals to other iOS sound apps or external devices. The AUUG app does not produce its own sounds, but instead acts to control other iOS audio apps running on the same device (as well as external devices). The AUUG app can be installed on iPhones (4S and up) and iPod touch devices (5th generation and up).

The AUUG cloud is online service at that allows AUUG app presets to be shared with other users, via your iPhone or iPod touch (no laptop or desktop needed).

Here’s a video intro to the AUUG Motion Synth:

The AUUG Motion Synth is being developed as a Kickstarter project, with prices for early backers starting at US $68.

Check out the video and share your thoughts on the AUUG Motion Synth!