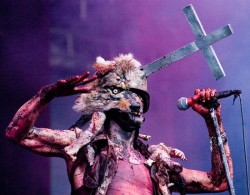 Canadian industrial electronic band Skinny Puppy is making headlines for invoicing the US government for reportedly using their music for torture.

“We never supported those types of scenarios. Because we make unsettling music, we can see it being used in a weird way. But it doesn’t sit right with us. So we thought it would be a good idea to make an invoice to the US government for musical services,” added Key. “Thus the concept of the [band’s new] record title, Weapons.”

Artistic statement or publicity stunt? Let us know what you think in the comments.